Managers operate in highly different fields. Decision-making can be based on models reflecting in part these differences. The challenge is to connect the respective models without too great a disruption. A threefold procedural approach is proposed by chaining a scheme of modeling in a complex field to an operationalized model to statistical multivariate methods. Multivariate pattern-detecting methods offer the chance to evaluate patterns within the complex field partly. This step completes the cycle of research and improved models can be used in a further cycle.

Accompanied by globalization, managers face the enormously risky task to establish business relations with unknown companies in far-flung countries with different languages and cultures. There exists a lot of literature concerning the influence of different cultures and how to enter markets or behave adequately in them. But no comprehensive approach exists which quantifies the impact of various factors in relation to the success in the foreign market where the obvious fact is that one has to know at least basic elements of that culture to be successful. This problem and the attempts to solve it can be seen as a recurrent cycle.

Managers decide among other things on base of at least rudimentary knowledge of the other culture. A successful outcome shows that they are – to some degree - on the right track and this will replicate their way of decision-making. An unsuccessful outcome on the other hand should lead to increased efforts in learning unknown cultural patterns. In both cases ongoing learning in a repetitive cycle is a prerequisite of long term success. This article contributes to tackle this challenge by proposing fundamental different but interconnected models.

One has to acknowledge that managers operate in highly different fields, from a global environment with different cultures to the company-internal areas of management science. From the view of science the term culture belongs to humanities („Geisteswissenschaften“ in German), qualitative oriented models are usually part of social sciences, decision-making models are part of the applied science of business management, quantitative and statistical based models belong to science („Naturwissenschaften“).

Each field incorporates sets of different theories, models or methods. Philosophy of science clearly tells us that the aims, procedures and assumptions can vary enormously. It is important to be aware not only of maybe many different underlying and implicit assumptions but basically different, even antagonistic worldviews in the above mentioned fields (Neumeier, 2008). This transcends a ‚simple’ approach of triangulation by qualitative and quantitative methods (Kuckartz, 2014).

The notion of culture is complex and its use is not limited to a single scientific discipline. Roughly stated one can interpret culture as the perception of a man-made psycho-social fabric manifesting different human lifestyles (Schrage, 2014, p. 253-255). The Dutch anthropologist Geert Hofstede views culture inwardly as an area consisting of assumptions, beliefs and values. Visible manifestations of culture show themselves outwardly as activities and behavior which constitute specific patterns (Hofstede 2001, p. 10). But how can decision-making managers ground their decisions within such a complex and in many aspects vague field on concrete factors and information?

To solve this challenge a threefold approach is proposed:

(1) Scheme of Modeling, which is (in the current example of culture) a combined model of conventional discussed cultural dimensions and overlapping patterns and behaviors. They influence communication in general and decision-making in particular.

(2) For operationalizing, a model of research can be established which measures environmental (company external) factors, internal factors and mixed ones. Within this model decision-making is crucial. Strategic decisions like the kind of market entry in a foreign market manifest their results after some time in indicators like sales, profit, market share.

(3) The data of this operationalized model can be used to expand the knowledge of the foreign culture and thus receiving better foundations for future decisions. This can be done by using statistical models like factor analysis or cluster analysis. These statistical multivariate models are able to detect afore unknown patterns within the data.

For the field culture, one can use research and conceptual development done so far. Widespread agreed assumptions are:

(a) Culture is seen as a socially shared inventory of values which offers orientation (Schrage 2014, p. 254)

(b) The behavior of single persons is based on these collective values.

(c) The behavior of single persons often manifests in the form of patterns.

These dimensions and patterns influence the communication between members of different cultures in a complicated way. Management-decisions are grounded on communication, see figure 1. 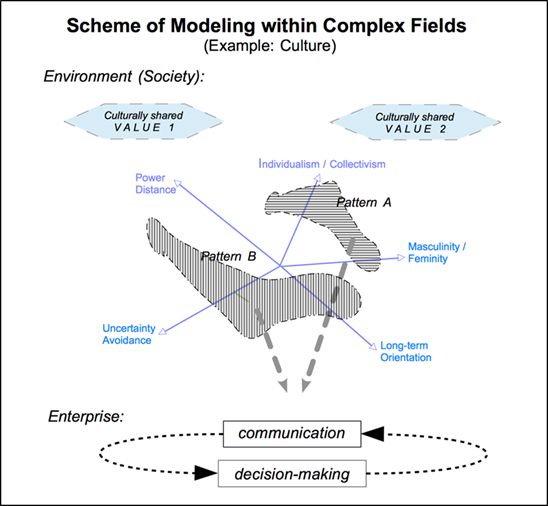 To be successful in the global market, managers do not only have to understand both their own culture and the culture of the trading partners, but also have to learn about values and specific cultural patterns. Values and manifested patterns shape communication and, finally, decisions. Hence, it is important to use empirical-based and valid models.

Thus, a generic view of the decision-making process has led to the understanding that strategic decision-making processes are not necessarily deterministic or programmable as a whole and take place in distinctive phases or intervals (Nippa, 2001). Contexts of strategic decision-making include not only environmental factors but also organizational, decision-specific and social-psychological factors at the top management level (cf., for instance, Bateman and Zeithamel, 1989; Papadakis et al., 1998). The governing factors can therefore be broadly differentiated into external (environmental-related) factors and patterns, internal factors (company-related) and external-internal mixed ones, see figure 2. 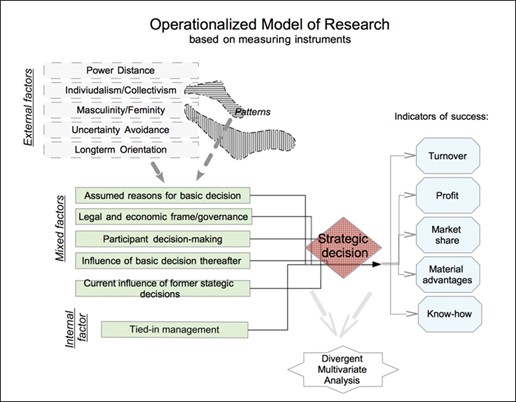 The operationalized model of research consists of independent und dependent variables. Independent variables can be company internal factors like the degree of tied-in of management in the decision-making process. Mixed (internal and external) factors like the outcome of various past strategic decisions, established governance systems within the company or participants in the decision-making process belong to independent variables. External factors – deducted from the complex environmental field – complete the independent variables. It is essential that in this phase of research the variables are based on quantitative data measured on nominal, ordinal or metric scale. This is a necessary precondition. Here both the applied selection of factors/variables and the quantity of of data - based for instance on data received by answers to various questions based on surveys with sufficient number of participants - are essential (Groves et al., 2009, p. 72).

To see results and to detect interdependencies usually the researcher analyzes data by various statistical methods: For seeing a focus, highlighting profiles or distributions one uses univariate methods. For testing hypothesis, one uses bivariate test models like calculating p-value, confidence intervals or effect sizes. Applications of multivariate methods like regression analysis or discrimination analysis offer a wide field of usage.

For the current purpose finding patterns multivariate methods like factor analysis oder cluster analysis are proposed. Specific versions of them are pattern detecting methods. They offer the inherent methodical characteristic to show patterns you didn’t know before. These methods can be seen as an example of divergent thinking and problem solving. One can interpret this phase of research as a turning point: So far, the research path consists of reducing complexity by selecting, bundling or extracting. This path is characterized by convergent thinking and reasoning. From now on thinking and reasoning switches into a divergent mode. Controlled but creative and expanding views can lead to possible and meaningful solutions. By applying these two antagonistic but complementary modes of researching and one can close a cycle of research, as figure 3 shows. 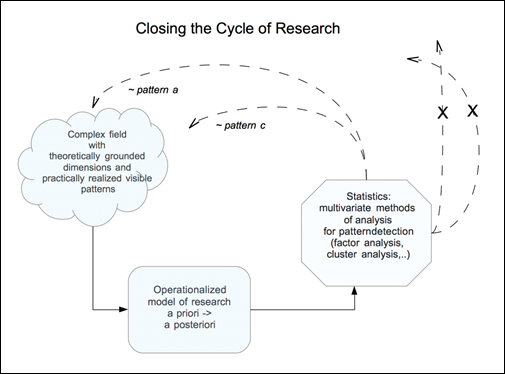 Figure 3. Closing the Cycle of Research

A word of caution has to be stated now: this schematic cycle looks simple but the recommended methods of pattern detecting methods don’t offer results on its own. The analyst has to apply sensitivity to the data, results of calculations and the interpretation (Backhaus et al, 2011, p. 367). For a closer look into this challenge let’s examine the results of multivariate factor analysis in more details. There are different algorithms. A popular one (the method of principal components) is to replace the n-dimensional observations (n original factors) by a linear combination of lesser variables. The basic assumption is that the original n factors are grouped to new components which offer a more concentrated view on the data. By this concentration the important factors stay in the calculation and less important factors are discarded. Here the analyst usually stops. This kind of factor analysis is confirmatory, it belongs to convergent and reductional reasoning and problem solving.

Instead of stopping, the researcher could apply from now on a changed view and continue with exploratory factor analysis. From now on divergent and expanding thinking can be applied, because the new components don’t represent just (lesser) bundles of the original factors but is a new factor-model. Now the researcher faces the crucial point of a multivariate factor analysis: he/she hast to interpreted these newly found components meaningfully in relation to the base of data on one hand and the complex field - whose structure has to be revealed - on the other hand. This means he/she has to name it. If the research can’t do this, then the particular factor analysis has failed and is to be discarded. To facilitate interpreting it is helpful to rotate the coordinate axis.

Exploratory factor analysis has the power, to offer an unexpected view not only to the observed data but can offer also novel alternatives for the answer to the research question. For instance, one could receive instead of usual ‚what to do’ recommendations for management ‚what not to do, what to avoid’ (see for an example: Haas, 2016).

Now one is completing the cycle of research – at least a round. Out of the first a-priori model, the observed data, the applied exploratory analysis and interpretation the researcher is coming now to an a-posteriori model which could be evaluated within a following round (Bandara and Roseman, 2005).

4. Discussion and Limitation of the Approach

At first one looks on the conventionally proposed dimensions in the complex field, for instance the dimensions proposed by Hofstede. When studying culture, one basically compares societies and not individuals. Therefore, dimensions like Uncertainty Avoidance or Masculinity/Femininity, which are fundamentally defined on the individual level, have to be thoroughly examined for what their corresponding content is on a societal level. Moreover, concepts like Masculinity/Femininity on the individual level are contemporarily in more or less constant flux – their definitions are changing. This leads to the next methodical complication: is this pivotal concept stable long enough so that it can be used as a grounding measure? Over more, certain studies like the famous Globe Study expanded the five dimensions of Hofstede to nine - the authors split some of Hofstede’s dimensions and added others (House et al., 2004).

One assumes that the basic orientations of values and behaviors exhibit dimensional characteristics, but often they do not seem to be independent from each other, as dimensions should be by definition. Therefore, it is no surprise that a meta-analytic review from nearly 600 empirical studies, for instance, state that “cultural values were most strongly related to emotions, followed by attitudes, then behaviors” (Vas and Kirkman and Steel, 2010, p. 1). Again, one has to bear in mind that you draw conclusion from one level to another one, from individual level to organizational level to social level. Thus, while the analysis of single individuals and their behavior, based on cultural dimensions (for countries) at the national level might be less accurate, Hofstede’s analysis of cultural dimensions could be more accurate at the level of organizations.

With the above proposed chaining of models of different fields one also chains different scientific fields with different paradigms and methods. From cultural science to management science to statistics and back to cultural science. Simple using predefined and fixed interfaces will not suffice. With each transition from one field to the other the researcher should bear in mind not only the questions of research but the whole context of the depicted research cycle. Therefore, the proposed chaining has inherent interdisciplinary characteristics.

© 2017 The Author. Published by Sprint Investify. ISSN 2359-7712. This article is licensed under a Creative Commons Attribution 4.0 International License.