Tourism is a mass phenomenon, and as a result, the number of accommodation capacities has increased enormously in recent years, especially in hotel groups, whether integrated or voluntary. Currently, a large part of hotel chains has subsidiaries around the world and covers major aspects of international tourism demand through their own distribution systems. Under these circumstances, this paper aims to analyse the global evolution of the main hotel chains, while also presenting performance issues, including average daily rate (ADR), and occupancy rate.

Globally, the development of the hotel industry had to consider the increasing need for tourist services of the population, which started to have faster means of transport that allowed them to reach the holiday destinations in a very short time, but also the availability to allocate an important amount of money for high quality travel services.

The degree of development of the hotel industry in a country is a true barometer for the quality of life, political stability, overall economic development, civilization in general. In this context, hotel chains represent a vital part of the industry, contributing significantly to its continued development and to the growth of the economy.

The link between tourism and the hotel industry is complex and takes place in both directions. On the one hand, the hotel industry develops, increases quantitatively and structurally as a result of tourist traffic, and on the other hand, the development of tourism is conditioned by the existence of accommodation spaces, their equipment, the quality and variety of the offered services.

The hotel industry also plays an important role in highlighting the tourist heritage by attracting different areas to the economic circuit, as areas rich in tourist attractions may remain out of tourist interest due to inappropriate equipment and vice versa.

Knowing the relationship between tourism and hotel industry has a special value for investing and directing the development of the hotel sector. Thus, worldwide, the accommodation activity is continually improving, adapting to the requirements of the tourist movement, meaning that the process of developing the activities in this field must be correlated with the changing needs of the profile market.

Currently, the hotel chains that lead the global revenue industry are Marriott International, Inc., Hilton, AccorHotels, and as a number of rooms, four hotel chains have exceeded 700,000 rooms, including: Marriott International Inc. with 1,444,096 rooms in 7.557 hotels; Hilton Worldwide Holdings with 997,922 rooms in 6,035 hotels; Intercontinental Hotel Group with 944,585 rooms in 6,282 hotels and Wyndham Hotel Group with 794,700 rooms in 8,670 hotels.

From an organizational point of view hotel chains have the attributes of multinational enterprises and share the characteristics of service industry organisations (Ivanova and Ivanov, 2015). The literature abounds in studies of hotel chains, mostof themdedicated to the process of their global expansion (Chen and Dimou, 2005; Altinay, 2007; Alon et al., 2012; García de Soto-Camacho and Vargas-Sánchez, 2015).

According to some authors (O’Neill and Carbaeck, 2010) the most important benefit of being a hotel chain, is the brand, which ensures greater market visibility, and it can be considered the ground of the global development.

The necessity to establish networks, like joining a hotel chain, can be a way to overcome the competition and to generate synergy effects for independent properties (Claver-Cortez et al, 2009).

Over the years, two fundamental categories of hotel chains have been established worldwide: voluntary chains, grouping independent hotels and integrated hotel chains. Independence refers to the legal, financial and patrimonial autonomy of the hotel business as a stand-alone entity (Lupu, 2003).

The hotel industry is a component part of a large group of activities which function under the umbrella of tourism. In this context, tourism refers to all the industries that provide the necessary and essential services for people traveling. These services may include: transportation, travel agencies, car rental; dining facilities; accommodation (conference rooms, guest houses, hotels, etc.); facilities for spending free time; specific stores. 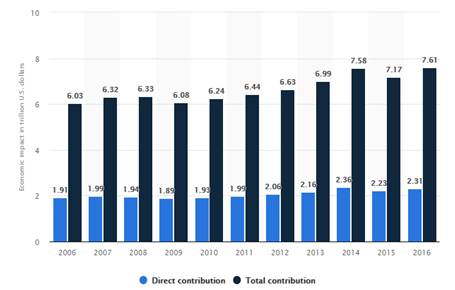 Figure 1.The direct and total contribution of tourism to the global economy from 2006 to 2016

The direct contribution of tourism includes accommodation, transport, entertainment and the attractions of these industries: hotel services, food and beverage services, retail, transport and cultural services, sports and leisure services. In recent years, the tourism industry has contributed annually to the world economy by about seven trillion US dollars, approaching 8 trillion in 2016. A highly profitable and valuable industry for the global economy, travel and tourism has a direct economic impact of two billion dollars every year. Regarding the contribution in this area, it should be stated that North America has the highest impact, closely followed by the European Union and North-East Asia. At the opposite, regions such as North Africa and Sub-Saharan Africa have the lowest impact on the global economy.

The complexity of the hotel sector is given by the plurality of location countries (there is practically no country without hotels), the variety of ownership and association forms, close interdependence with other sectors of the world economy and the global network of connections.

Analyzing the data contained in the figure above, we see an upward trend in the global hotel income, namely a 60% increase in revenue over the period 2010-2018. In this context, it should be stated that in 2015, the hotel chain that contributed most to the global income, was InterContinental Hotels Group, which in 2015 made $24 billion in over 4800 of hotels, closely followed by Hilton Worldwide and Marriott International with 4,278 and 4,424 hotels around the world.

In terms of market evolution of integrated hotel chains, we can see by looking at Figure 3 that following its merger with Starwood Hotels, which has allowed its portfolio to exceed one million rooms, Marriott International has strengthened its leadership position in 2017, counting 1,169,902 rooms. 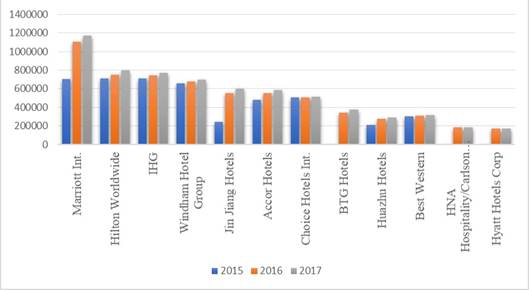 Thanks to the development of the Hampton Inn, DoubleTree and Garden Inn brands, the Hilton Worldwide Hotel chain has seen a 6% increase in accommodation offer, ranking second.

The IHG, which declined from its third position in 2016, registered a 3.1% increase in accommodation offer, followed by the Wyndham Hotel Group.

Significant changes were recorded also, by the hotel groups in China. For example, Jin Jiang registered in 2017 an increase of 8.4%, BTG, 10% and Huazhu a 12.9% increase. Finally, Hyatt Hotel Corp is again in 12th place, with a 7.3% increase in its offer.

Indicators for performance analysis in the hotel industry are the average daily rate (ADR), and occupancy rate of a hotel. To obtain the most accurate indication of performance, these benchmarks should be analysed together. 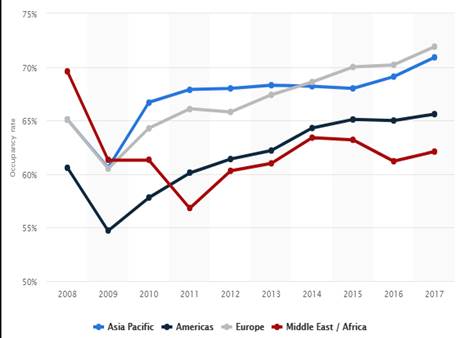 Each region presented in the above figure, summarizes several sub-regions:

For 2018, the global hoteliers estimate that, compared to 2017, the hotel rates will increase with 2.8%. Analyzing the figure bellow, we can see that the highest increase it is expected to be registered in North America – namely 3.5% compared to the previous year – at the opposite, Europe will record the lowest growth in the four analysed regions – 1.4% compared to 2017.

However, in terms of average daily rates, the Middle East and Africa were by far the most expensive region with a 140.94 US dollars rate, followed by the two Americas with an average daily rate of 126.43 dollars.

In the United States, the hotel industry generated revenue of 199.3 billion dollars, with a hotel occupancy rate of 65.9% and an average daily rate of 126.72 dollars. The most expensive city was Boston, with a daily average rate of 266 US dollars, followed by New York with $ 258.

Therefore, we are witnessing to a development of hotel chains on the international market, and in what concerns the registered revenues, the chains that lead the global hotel industry are: Marriott International, Inc.; Hilton; AccorHotels; Wyndham Hotel Group; Hyatt Hotels Corporation; Jin Jiang International Hotel Management Co. Ltd.

And at the level of the hotel chains, Marriott International Inc is ranked first, after buying Starwood Hotels & Resorts Worldwide with $ 12,200 million. Marriott has reached over 1,400,000 rooms in over 7,557 hotels. Hilton Worldwide Holdings ranked second with 997,992 rooms in 6,036 hotels.

The globalization of tourism has led to the formation of groups of companies with ever-stronger tourist services, true empires operating on all continents and in almost all countries of the world, which also benefit from international capital. Profits of these groups are also quite high, allowing further development of hotel chains on the international market.

Over the last fifty years, the development of the hotel sector has taken on an unprecedented evolution as part of the tourism industry, especially in economically developed countries and less substantially in developing countries; this development was possible due to the many factors of influence: economic, social, technical, demographic, political, psychological, educational and civilization.

The reputation of the brand and the quality of services provided at high standards have led to the recognition of hotel chains by an impressive number of customers worldwide, as evidenced by the continuous increase in the annual average occupancy rate.

© 2018 The Author. Published by Sprint Investify. ISSN 2359-7712. This article is licensed under a Creative Commons Attribution 4.0 International License.